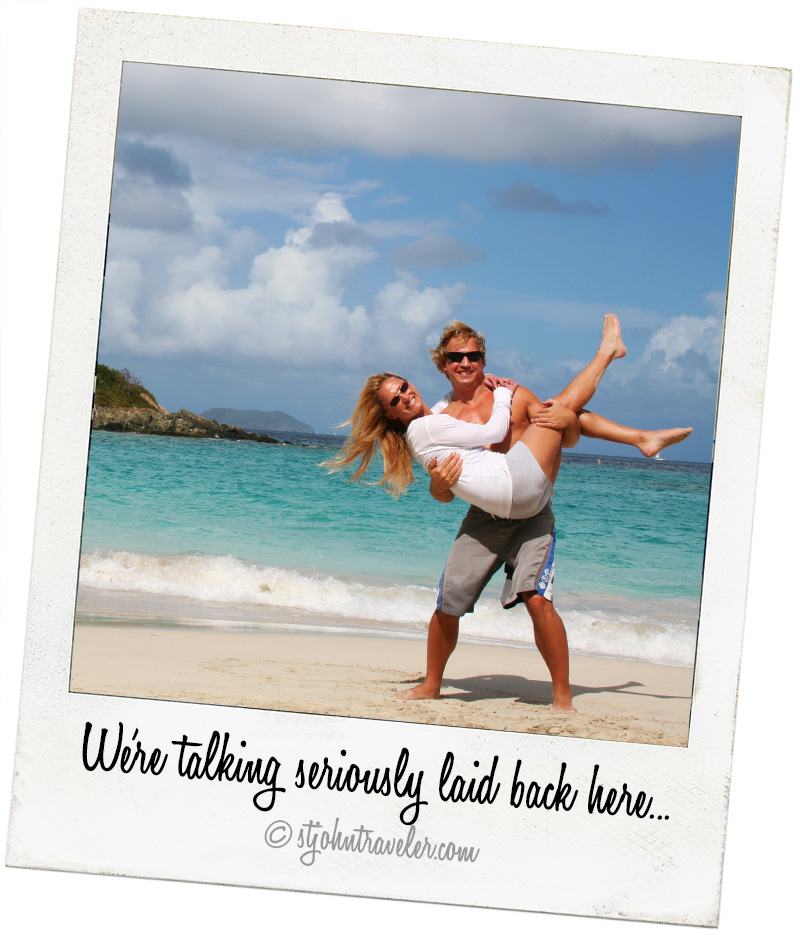 When Jerry Garcia went to that great jam session in the beyond: he didn’t stop at heaven, he went to St. John. And after your visit, you’ll understand why.

St. John is the smallest of the US Virgin Islands and by far the coolest of the islands. So cool that St. John is where people from other islands go when they feel the need to get away from the hectic pace of life on any other speck of Caribbean paradise.

I’ll give you a minute to try and imagine anyone feeling stressed out about life in the islands. Now try and picture a place that’s better than the worst day on any other tropical island paradise.

We’re talking seriously laid back here. Even the wildlife is laid back. Cruise down any of St. John’s streets and you’re liable to spot iguanas, wild donkeys, herds of goats, scurrying mongooses – mongeese? – and packs of dread-locked, teenaged white kids. The only wildlife likely to cause any harm to unsuspecting tourists are the iguanas who, for some reason, remain convinced that brightly painted toenails are simply mobile flower petals and thus, lunch.

Handy travel tip, folks, if you’re going to paint your toenails, paint them black. The iguanas won’t nibble you and fewer people will bother you due to the fact that they’ll think you have leprosy. Keeps the random stupid questions down.

And speaking of stupid questions, do not ask the sweet dread-locked teenager behind the bar or working the counter at the souvenir shop if he lives here. It’s an island, a rock surrounded by water, far away from the rest of the world. Of course he lives here. Where else would he live? Nobody needs frequent flyer miles that badly!

St. John is where those poor souls who live on St. Thomas, St. Croix and the British Virgin Islands run to indulge in a round or seven of blender sports. We fully expect blender sports to be featured in the summer Olympics. The game involves a race from bar to bar in an effort to sample as many frozen “foo-foo” drinks as possible in the shortest amount of time, all while remaining relatively upright and coherent.

It should be noted that I am currently leading the time trials in the daiquiri division, thanks to my natural immunity to the dreaded brain-freeze often suffered by amateur blender sports participants. I welcome all challengers. In the words of the current president, who knows a thing or two about drinking games, “Bring it on!”

Blender sports are a favorite local pastime, made even more exciting by the special challenges posed by the ferry services.

You see, St. John is one of the ultimate “you can’t get there from here” spots in the world. The only way onto the island is by boat. Unless you have your own boat, you’ll find yourself relying on the inter-island ferry services.

The ferry services are tricksome devils. They operate under a loosely organized schedule masquerading as a minute-by-minute schedule. Sure they say the last ferry out is a ten o’clock, but do they mean it?

Only sometimes. Ten o’clock can mean many things in the islands. Often, it actually means the ferry will begin pulling off of the dock three seconds after you begin running down the dock doing that cute little dance of desperation. Don’t waste your time. The ferry will not turn back for you, no matter how cute your dancing is.

Being stranded on St. John is not the worst thing that can happen to you. There’s always the chance that a kind-hearted local will take you in for the night although I really don’t recommend that you take anyone up on that offer. After all, these people are all here because, frankly, they’re not all there.

In fact many of the current residents of St. John live here precisely because they were stranded by the ferry and found it easier to get a bartending job, an apartment and a Suzuki Samurai than to arrange for alternate transportation off the island. Everyone drives Samurais. It’s not for the look or reliability of the vehicle, it’s because everyone drives Samurais. When you need a part, your mechanic has a much easier time stealing one for those vehicles then he does for any other make.

If you’re not ready to make a switch to a lucrative bartending career, and believe you me, it’s lucrative – all of those desperate, stranded tourists looking to drink away their troubles can be quite profitable – you can always sleep on the beach. It helps to be enormously drunk if you plan to do this. Sleeping on the beach may seem romantic and carefree and, in fact it is, if you don’t mind the myriad biting insects and crustaceans you are likely to encounter.

If it’s not the sand fleas, it’s the mosquitoes. And when the flying critters are busy, there are always the sand crabs. Add in a roving iguana and some pink toenails and it’s going to be a long night. By the way, the mosquitoes are so powerful that they have recently formed their own political lobbying group and are expected to take at least two Senate seats in the next election. We take mosquito protection quite seriously in the islands.

If you decide to opt for indoor accommodations, a step down any street will reveal a woman standing by the gate of one of the smaller hotels offering up the last available hotel room for a bargain price. Take her offer. You’ll have a relative mosquito free night indoors and despite the fact that the very same hotel lady will be offering up the “last available hotel room” for the next three hours directly beneath your window, you’ll get a good night sleep. There is always another room in the islands.

You could always try one of the swankier hotels on the island. They too will have the last available hotel room for you but it will cost you more than you’ll pay for your Suzuki Samurai in the morning on the way to your job interview at the bar. At least they won’t be standing outside your window all night hollering about their last available room. And you’ll get a continental breakfast in the morning.

Lest you think you’ve stumbled onto the island of misfit toys, rest assured that St. John isn’t just about the party. It’s mostly about the party but it is also one of the world’s best-kept secrets spots for natural beauty. The bulk of the island was donated to the National Parks Service by the Rockefeller family in 1956 to create what was then the twenty-ninth National Park. Roughly seventy-five percent of the island remains Park land to this day. A hike down one of the many nature trails or a boat ride around the island reveals the same views and beauty that Christopher Columbus and crew spotted on their first trip by in the seventeenth century.

Ok, it’s the same view minus the native tribal folk and plus a few five-star hotels but you get the picture. To sail around the island is to step back in time in a way that you cannot do in any other US territory or possession.

Hop off of your boat to dive or snorkel and you’ll find fantastic reef life in waters where a bad day of visibility is 85 feet. Brightly colored tropical fish, sea turtles and other sea life swarm around the coral in ways that the Pixar animation team can only envy.

Take particular note of the Caribbean lobsters you’ll see wandering about in plain view. Yes, they are laughing at you because they know that they live in a National Park and snatching them up for the boiling pot is a federal crime. Make extra nice to your local dive operators and maybe they’ll take you to their favorite underwater playgrounds where the lobster are a little more wary because they in the non-National Park suburbs.

The islands’ location in the hurricane belt has the dual effect of weeding out the weak and providing divers with numerous shipwrecks to poke around in and explore. Make sure to schedule a trip to the R.M.S. Rhone in the British Virgin Islands. It’s a fairly advanced dive but not to be missed. Most of the St. John dive operators offer regular trips.

Hike the Reef Bay Trail and you’ll see the ruins of some of the islands early sugar cane plantations as well as evidence of island life some say from as early as 770 B.C. There are petroglyphs carved onto some of the rock outcroppings that suggest that early residents loved St. John too. Look closely and you might spot one with what looks to be a daiquiri in hand. The mystery of how they held the blender sport time trials without electricity or a blender continues to stump archeologists but it’s all part of the island charm.

Spend any time with the locals and you’ll find that they wouldn’t live anywhere else in the world. St. John is what Jimmy Buffet meant when he sang about living on an island paradise. Sure it’s not always as easy as it sounds, but it’s definitely worth it. One visit and you’ll be honing your bartending skills and checking the newspaper for a reasonably priced used Suzuki Samurai.

Lyssa Graham is a freelance writer who has spent the better part of a decade living in and around the US Virgin Islands. She doesn’t drive a Samurai anymore, but she has, oh, she has.