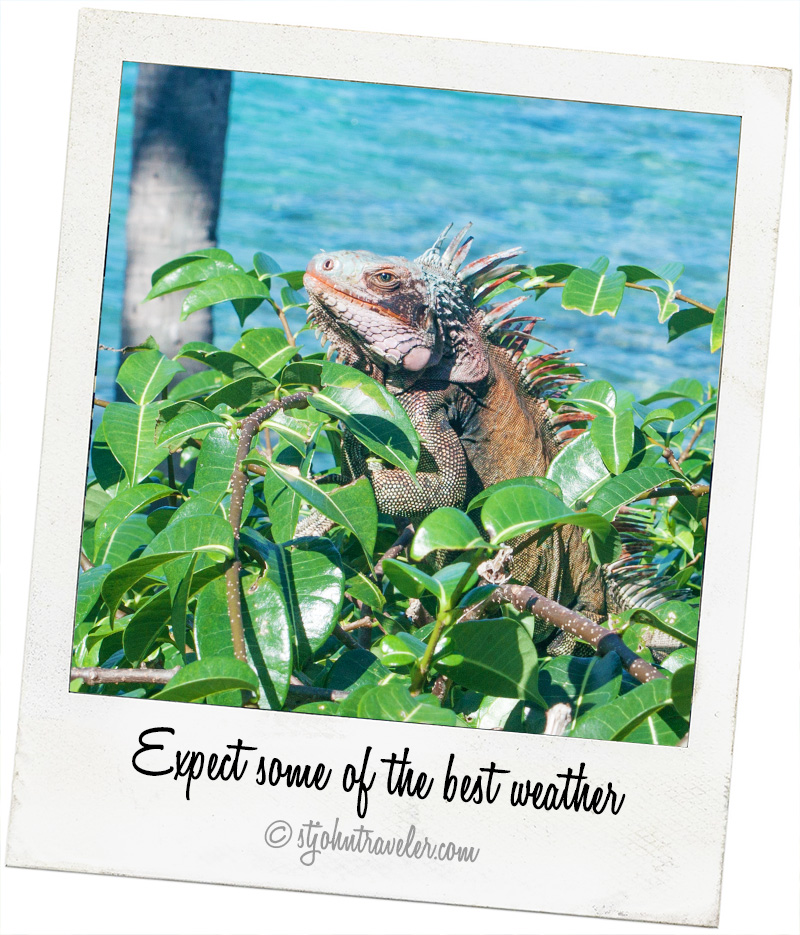 There are really only two seasons here at St. John; the “warm” season and the “even warmer” one. That’s why happy vacationers to the tropical St. John Island – the smallest and most protected of the three main U.S. Virgin Islands – can expect some of the best weather in the world. Really just a tad bit on the hot side if not pleasantly warm for nearly the whole year round, this Caribbean island boasts temperatures that range from the 70’s through to the 80’s for the winter and spring months of December through May. These temperatures actually get up to the 80’s and through to the 90’s during the hot summer and fall months spanning from June all the way to November.

But no matter what the season, vacationers will always be pleasantly surprised by a little bit of light rainfall during any given day. These showers are most often brief, and usually give people a sense of relief during the hotter days of the year. In addition to the rainfall, vacationers often talk highly of the warm breezes that come in off of the Caribbean waters and brush against their hair as they lie still on the white sandy beaches. That’s why it is sometimes a good idea to stick close to the coast if the weather is starting to sizzle, as the accessibility of water and frequent gusts of light wind make cooling down easier.

In general, the water is about ten or twenty degrees cooler than the air, so that it typically ranges from about 70 degrees to 80 degrees. As such, it is cool enough to be refreshing but warm enough to still invite many vacationers into its tranquil blue clarity. Just to show how warm the air gets during the summer and fall, it should be mentioned that most restaurants, shops and cafés make use of air conditioning in order to combat the heat at times. In general, however, St. John enjoys milder weather due to the fact that a lot of it is recessed inland. The high altitudes of the national park as well help to make this a cooler place to be, particularly for the time of the winter months during which many visitors are actually advised to wear a light jacket in the early morning and late evening hours.

That said, the winter and spring months are still the best time to visit, as the temperature is generally at its mildest and the heat can at times feel a little oppressive for those who are not prepared for it. It should also be mentioned that, aside from its typically warm and moderate climate, St. John is – along with all the other islands in the Caribbean – a prime target for hurricanes. Of course, hurricanes are a seasonal phenomenon, making them only something to watch out for during the fall months. If you are traveling during this time, keep an eye on the hurricane report so as not to have to cut your vacation plans short unexpectedly should the warning go out that a hurricane is coming in.