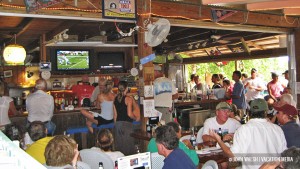 Skinny Legs is located on the quiet side of a quiet island in the U.S. Virgin Islands. We are proud of the laid back atmosphere at our sail-cloth-for-a-ceiling, open-air bar and grill where you can relax with the locals and enjoy seriously good food and drinks at affordable prices.

Skinny Legs is now proudly owned by Doug Bean and his wife Jaime Elliott, who bought the business on April Fool’s Day 2012. But by that time, the bar had already been serving happy customers for more than two decades.

The original Skinny Legs owners, Doug “Dougie’ Sica of New Jersey and Maurice “Moe” Chabuz of Massachusetts, opened the bar in May 1991 when there were only a few homes on the Coral Bay hillsides and a handful of boats in the harbor.

Moe and Dougie were best friends who worked at the famous Back Yard Bar in Cruz Bay together in the 1980s. With little more than their bartending and schmoozing expertise, the two took over what had been known before as Red Beards, renaming the establishment after their own sinewy stems.

With its tradition of Same Day Service, Skinny Legs quickly became a beloved part of many people’s vacations and a home base for part- and full-time residents alike.

Today Skinny Legs maintains its tradition as a family-friendly, affordable bar and grill where parents can enjoy a cold one while the kids play in the backyard. There are bands, regattas, fundraisers, horseshoe tournaments and more; and we still promise that Same Day Service.

We’re famous for our burgers and have been named in Esquire Magazine’s Top 100 bars several times. But we also have great fish sandwiches, fresh salads and more. What we don’t have is a deep fryer or a blender. Don’t expect french fries with your burgers, they come with potato chips instead, and our drinks are so good, you won’t miss that noisy, annoying blender.

So come on out to Skinny Legs, a laid back bar in laid back Coral Bay.