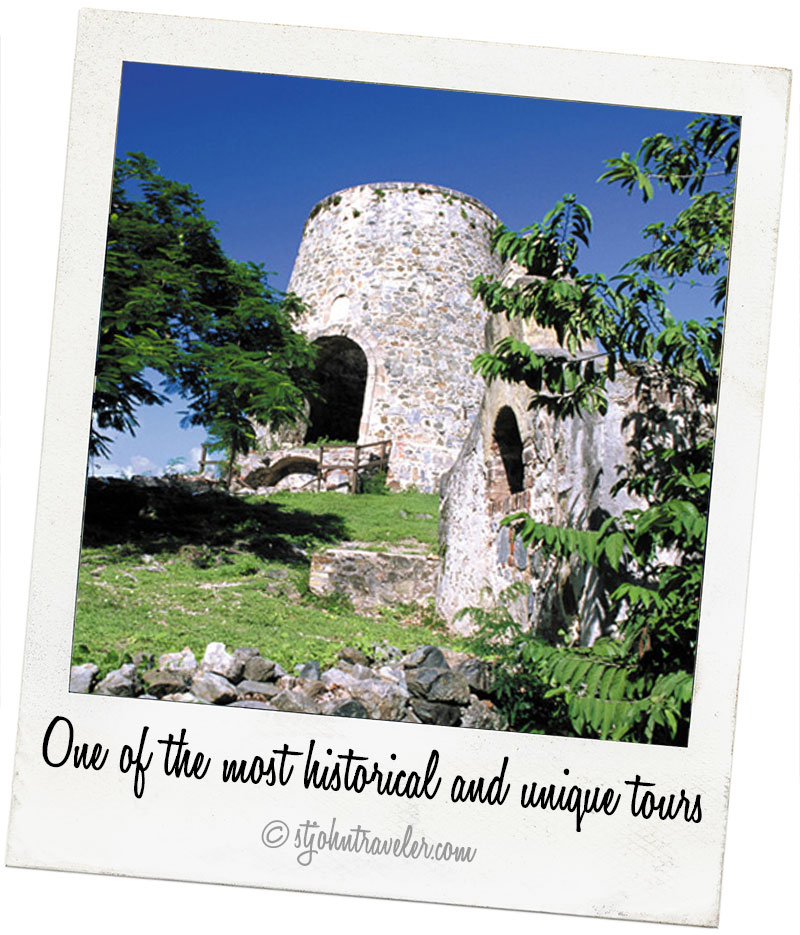 The Annaberg Sugar Plantation is one of the most historical and unique tours that you can take on St. John. The Virgin Islands National Park Service has a self guided tour that will let you walk through the history of St. John Island through the ruins and partially restored buildings. This plantation will give you a glimpse into the past of this island and the impact of the sugar industry.

The Annaberg Sugar Plantation was named after Christopher William Gottschalk’s daughter Anna. If you translate Annaberg from Danish it means Anna’s Hill. The plantation was first built in 1718. Most of the buildings that are left standing today are from the 19th century, but the wall of the horsemill and the slave house were built during the 28th century.

The slave’s homes are barely standing now. During the days that sugar was produced on this plantation and slaves worked the fields, the horsemill and ran practically everything there were a total of 16 buildings in this area. These houses that the slaves called home were made from daub and wattle. Daub comes from a mixture made of coral, lime and sand that they fired and then mixed with molasses and mud. The wattle was made of wood from the coffee bush. The roofs were made from either sugarcane leave or palm tree fronds.

The steep hills behind the factory were once plush with sugar care. The entire hill side was planted in sugarcane. Water was brought to each plant by hand and during harvesting time most slaves worked 18 to 20 hours a day. The sugar had to be cut and loaded into carts and then driven down to the sugar mill.

As you walk through the ruins you will notice the steep hills behind the factory. This entire hillside was planted in sugarcane. First the land was slashed and burned. It was then terraced using the native stone as retaining walls. The cane was brought to the prepared fields and planted. Water had to be hauled to the sugarcane plants by hand. When it was time to harvest the cane, the slaves worked 18-20 hours a day. They cut the cane and loaded it into carts, which were drawn by donkeys to the sugar mill. The long hours put in by the slaves can be attributed to the fact that the sugarcane had to be juiced within 24 hours of harvest or it would spoil.

The windmill and the horsemill both were used to juice the sugarcane. After juicing the sugarcane would then be produced into sugar and rum. The rum was produced in a rum still and if not timed perfectly would produce molasses.

You will notice the ruins of a cistern located in the mill and remains of others on the hill. This water was used in watering the sugarcane field through aqueducts.

All plantation owners throughout the Virgin Islands had slaves to work their fields which included sugarcane, cotton and various other products that could be grown in a tropical environment. The slave owners had to find a cheap way in which to feed their slaves as shipping food from other countries would be expensive and they did not want to give up their land that could be used to produce the tropical products, they had a big problem. Many of these slave owners gave the slaves what was called provision grounds. This area of land was not suitable for sugarcane or cotton. The slave could produce their own food on this land. But, this is the only food they had. In case of droughts or natural disasters the slaves had no food. This is why many slaves rebelled or tried to leave. Many slaves in the 1770?s died of starvation after the long drought. In the year 1867 a large hurricane hit this area and the Annaberg plantation was left abandoned by the owner. The slaves had to fend for themselves and were not allowed to stay and work at the plantation.

Carl Emanuel Francis in the early 20th century built a cookhouse on the land and built his own home were the horsemill once stood. In 1924, another major hurricane hit Annaberg, the family survived by taking shelter in the windmill. Francis and his family raised cattle here until 1935. In 1935, the plantation was sold to Herman Creque. In 1955 Rockefeller bought the plantation and donated it to the National Park. The house was torn down, but the cookhouse does remain.