Some of the best snorkeling on St. John

In a fit of liveliness that belied my usual predilection for lounging around doing vast amounts of not much, I decided to join some friends for a snorkeling expedition to Leinster Bay on the Island of St. John in the US Virgin Islands. 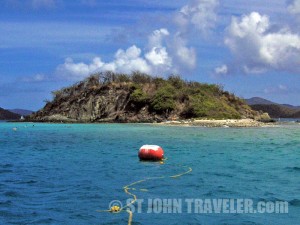 The bay contains the small Waterlemon Cay which is very popular for snorkeling around, at least for those that don’t mind the mile-or-so hike to the beach from the parking area and the robust swim out to the isle. Access with a four wheel drive can get you the closest, but regular road cars tend to stop at the parking lot just off the road; it’s not a good idea to risk driving down the dirt road on a suspension that can’t cope.

This is a remote beach with no facilities aside from a single picnic table, so any supplies have to be packed in, unless, of course, you head over there on your own boat or in a rented one. It’s not particularly sandy but it is picturesque, so take care when walking in the water; sea urchins and sting rays are common, and can give you a nasty sting if you step on them. Barracuda have also been known to attack people wearing shiny jewelry, so leave the bling at your accommodation unless you want to risk a toothy aquatic mugging. 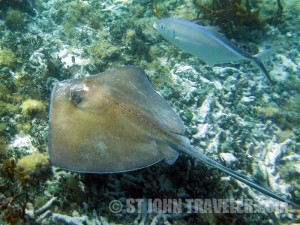 I’ve heard a number of people complain about the walk and the swim, but it’s really only the weakest of constitutions that have any bother. If you can’t walk more than a mile and swim longer than a couple of hundred yards then this possibly isn’t the adventure for you, but don’t forgot flippers can help immensely (for the swimming part, that is. Quite the reverse for the hike).

The idea is to snorkel around Waterlemon Cay to the seaward side (most people recommend counter-clockwise to get the most benefit from the prevailing winds and currents) to experience the richer marine life, especially the extensive soft coral formations. Many people will clamber over the rocks hugging the bay to lessen the open water they have to cross to get to the cay, so some kind of suitable footwear should be worn. Several people have also reported their bags left on the beach have been raided by wild mongooses, who seem to have developed a taste for sandwiches and bags of chips. 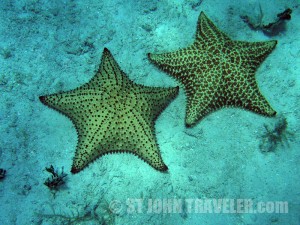 Sea turtles and huge starfish are common, as are shimmering regiments of tropical fish that come in hues so bright you suspect them of slipping you an hallucinogen. They spin and turn in unison about you like snowflakes on a blustery day, with a discipline designed to distract predators. Not that they give this impression, however; you’ll often find yourself in the midst of a shoal as if they couldn’t care less you’re there. Somehow I felt a little dissed.

It’s this kind of experience that encourages the most popular thing visitors say; this location is the best snorkeling they’ve ever encountered, and the vast majority say this one spot made their trip. It certainly made mine. I may just start leaving the hammock more often.