Nearly 1/2 of Virgin Islands National Park is under water. Mangrove shorelines, seagrass beds, fringing and patch coral reefs offer a diverse and ample array of snorkeling opportunities. However, identifying the ‘best’ snorkeling on St. John is highly subjective, based on factors such as individual snorkeling/swimming abilities, water and wind conditions and the marine life particular to a given site.

This guide describes a variety of potential North Shore snorkeling areas so that you can choose what’s best for your own interests and needs. 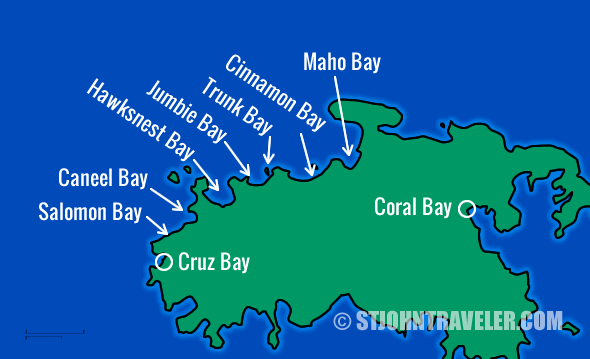 Between the bays’ beautiful sandy beaches is a rocky headland that extends into the water. Basketball-sized brain corals, lettuce leaf, Elkhorn, knobby mustard hill and even some pillar corals are found in the western side of Honeymoon Bay atop an older reef platform. Fish populations are abundant and comprehensive. Look closely to observe the locally rare black and white geometric encrusting tunicates. The water is clear and 10 feet or less in depth. Further seaward in deeper water are the scattered star corals and rubble that offer protection for fish. Coral heads fringe the shoreline from Salomon westward toward Cruz Bay and eastward from Honeymoon to Caneel Bay.

Note: There is no boat exclusion zone at Honeymoon. Be cautious of boats and dinghies. This beach is a popular destination for hiking tours and charter boats from mid-morning to mid-afternoon.

A fringing reef in about 10 feet of water hugs the shore east of the resort’s main beach (to the right of the pier). It is generally protected from wind and waves. While not particularly dense, the reef supports a mixture of seafans and other gorgonians as well as hard corals such as brain, mustard hill and the relatively rarer finger corals. It is a good beginner’s site if the numerous sea urchins are avoided. Continuing east beyond the point to Scott’s Beach, the reef peters out. Only the main beach is open from the land. All others at Caneel are accessible to non-guests by water only.

Hawknest Bay has a couple of shallow reefs that extend perpendicularly from the sandy beach. Some of the area is too shallow to safely snorkel above it and must be viewed from the sides. Since the 1980’s various storms and land development pressures have destroyed or smothered much of this reef but it has begun to recover nicely in the past few years. Fast growing elkhorn coral, hit hard by disease in the past three decades, seems to be making a comeback. Scattered corals are found in waters up to 20 feet off the eastern end of the beach. The rocky headland separating Hawknest from Gibney’s Beach to the east is mostly devoid of fish and coral. From the dead reef in front of the yellow Oppenheimer house, a few coral heads follow the shoreline below Easter Rock.

Jumbie Bay is accessed from Northshore Road by a wooden stairway some 200 feet east of a parking area on the other side of the road. Beware of traffic. From the right side of the beach begins a shallow reef that extends, maze-like at first, all the way along the cliffs to Trunk Bay. The sandy bottom is eventually about 10 feet beneath you as you follow the reef. Seaward, the water becomes deeper with very large brain and star corals. Look for hidden lobsters or perhaps a nurse shark.

Going to the left from Jumbie, a little coral grows (including Elkhorns) before a 5 – 10 minute swim brings one to 15 – 30 feet of water where abundant marine life covers the underwater slopes of the island and offshore boulders. From here you can see around the bend to Denis Bay and Perkins Cay. Both have some of the nicest reefs around but are a long distance from Jumbie. Denis Beach has “beware of dogs” and “keep off” signs, but by law one can go up on the beach as long as one doesn’t go beyond the tree line onto private property. Wind chop can be a factor in the Jumbie/Denis area.

Trunk Bay’s Underwater Trail may seem somewhat overrated, despite its fame, but it is good for beginners, children or anybody who wants to learn about marine life by reading the plaques located about 5 – 10 feet beneath you. The coral is in suprisingly good shape despite abuse from winter storms and thousands of visitors yearly at this most crowded (but beautiful) St. John Beach. Fish populations are abundant, perhaps enhanced by illegal feeding activities. The island’s biggest population of puddingwife fish seems to inhabit this bay, which along with Jumbie Beach is a no-take marine reserve. Beyond the official confines of the trail the reef continues, fringing the western shore of the Cay. There’s not much to see on the Cay’s tip or eastern side. When winter swells are not rolling in, Trunk Bay is usually calm and clear. The underwater trail is apt to be very busy from 10 am to about 3:30 pm.

Down at the left (west) end of the beach begins a fringing reef. This diverse reef is a good place to see tunicates, also known as sea squirts. This area is popular with tour boat snorkelers.

At the right (east) end of Trunk Bay beach begins a very shallow reef that hugs the shoreline to Windswept, another “private” beach. The wind further out and the relative beat up look of the coral here may dissuade you from going any further. Trunk Bay has the added attraction of lifeguards, flush toilets, showers, lockers, a gift shop and snack bar.

Cinnamon Bay tends to be one of the windiest locations on the North Shore, making snorkeling slow going. Visibility isn’t usually affected, however. From the beach out to Cinnamon Bay Cay are patched of reefs that include a small but interesting ledge where close inspection may reveal a variety of invertebrates and juvenile fish. Shallow areas of sand can be used for resting before snorkeling around either side of the cay (larger corals) or to the 20-foot backside where a greater concentration of gorgonians (“soft corals”) can be found. Off the west end of the beach towards Little Cinnamon Bay is a section of reef in shallow water that is largely silted over. A few fish can be seen as well as part of a propeller of a small airplane that crashed there long ago.

In the canyons of the mostly dead reef at the opposite (east) end of the beach are often plenty of fish. The huge Jewfish have been seen here in years past. Along the rest of the beach are scattered coral heads providing shelter for some fish.

The seagrass beds of this shallow bay provide food for green sea turtles, which are seen more frequently in the early morning or late afternoon. Limited coral and fish can be seen at the rocky tips of the bay away from the beach. As with Francis Bay to the east. Maho is usually calm with minimal wind chop, and is much less affected by winter swells than elsewhere on the North Shore.