So Many Cruise Lines, So Little Time

Carnival, Celebrity, Holland America, Princess, Royal Caribbean, Norwegian; the list goes on and on. At last count, there were over fifteen major cruise ship lines operating in the Western Hemisphere alone. Of those, ten companies described here operate ships that carry more than 750 passengers at a time. As a group, they have more than 85 ships on the worlds seas. The cruise travel industry has become big business, attracting some new players to the game and turning up the heat for some old favorites. The result is a wonderful selection of companies, ships, services, amenities and destinations. 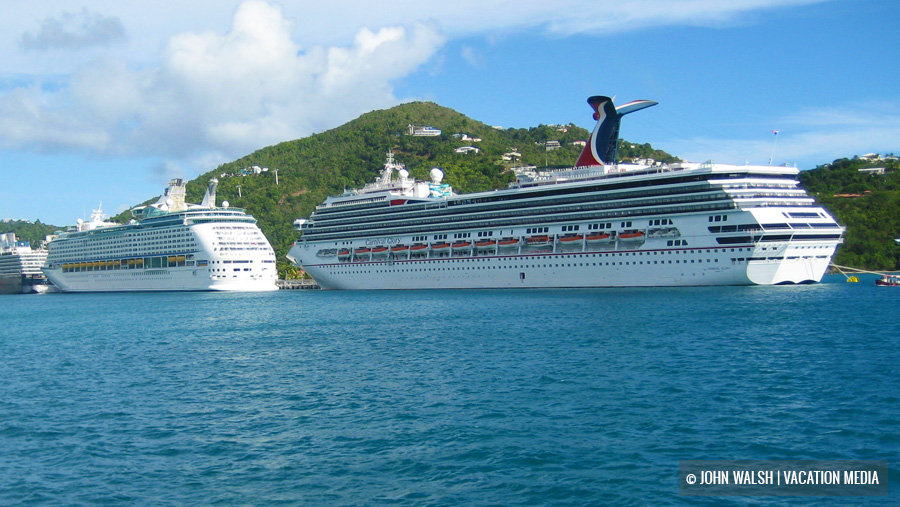 Today’s cruise ships are like floating resorts, literally. They have swimming pools, spas, salons, gyms, casinos, movie theaters, numerous dining and entertainment options and an almost obnoxious number of scheduled and independent activities to choose from. One ship family even has an ice rink! All this plus the opportunity to travel to several different ports, has been drawing in the tourists by the millions—9.4 million in 2003 alone, according to the Cruise Line International Association.

The Maritime Administration (MARAD), which is part of the U.S. Department of Transportation, keeps track of cruise industry statistics for lines that operate cruise ships with a capacity of more than 750 passengers. There are ten companies that fall into this category: Carnival, Royal Caribbean, Disney, Celebrity, Holland America, Costa, Norwegian, Crystal, Princess, and Cunard.

Within this group, some personalities and reputations stand out. According to MARAD, Carnival Cruise Line has the largest market share of the ten, with almost 33 percent. Royal Caribbean is second with 26.4 percent of market share. That doesn’t necessarily mean they are better cruise lines, but it does mean they are better at attracting passengers. One of the reasons is because they have many ships and offer many cruises with a wide variety of destinations.

Carnival has over twenty ships, including the Paradise, the world’s only nonsmoking vessel. They cruise to over 60 destinations including: The Bahamas, Caribbean, Mexico, Hawaii and Alaska. Most of Carnival’s ships, known as “fun ships,” have a theme that matches its name, making it easy to develop a favorite based on personal interests.

Royal Caribbean operates megaliners and superliners sailing the Americas, Europe, and the South Pacific. At last count they had nineteen ships including the Voyager family, the vessels with ice-skating rinks. RC visits over 100 ports of call in places like Alaska, Canada/New England, Mexico, Hawaii, the Caribbean, the Panama Canal, Bermuda, and the Bahamas. In 1997, Royal Caribbean merged with Celebrity to form Royal Caribbean Cruises Ltd. The two entities continue to maintain separate websites and identities.

As might be expected, Disney is often voted the top cruise line for children and families. In addition to their many unique activities and packages, they also have their own island in the Bahamas, Castaway Cay, where each cruise stops. Other ports of call include Naasau, St. Maarten, St. Thomas/St. John, Key West, San Juan, Antigua, and St. Lucia.

Celebrity cruise line has nine ships that cruise to a variety of locations across the world including Alaska, Bermuda, the Caribbean, Coastal California, Canada/New England, Galapagos, Mexican Riviera, Europe, Hawaii, South America, and transatlantic destinations. As was noted, Celebrity and Royal Caribbean together make up Royal Caribbean Cruises, Ltd.

Holland America has 13 ships that sail the world, calling at over 280 ports of call and visiting scenic cruising destinations on all seven continents. A partial list of destinations includes Alaska, Asia and Pacific, Canada/New England, Caribbean, Europe, Hawaii, Mexico, and South America. Their ships tend to be more upscale and luxurious, with grander ballrooms and more formal dress code expectations in some areas.

Costa cruise line is the Italian member of Carnival, although they are counted separately in the MARAD statistics. With ten ships in their fleet, they travel to numerous destinations across the world including Florida, Mexico, Jamaica, the Bahamas, Puerto Rico, and a host of transatlantic and South American locations.

Crystal Cruises has just three ships, the Crystal Harmony, Crystal Symphony, and Crystal Serenity. Although they are small compared to RC or Carnival they are popular with cruise travelers. For the past nine years, readers of Travel & Leisure magazine have voted this line the “World’s Best Large-Ship Cruise Line.” In fact they beat out the small ship competitors as well.

In its early years, Princess cruises consisted of one ship that traveled to Mexico. That ship, Pacific Princess, was the ship used in the popular TV show, the Love Boat. Since that time, Princess cruises have added over ten ships with four more on the way. They travel to Alaska, Asia. Australia & New Zealand, Canada & New England, Caribbean, Europe, Hawaii & Tahiti, Mexican Riviera, Panama Canal, and South America.

Cunard is a cruise company that traces its origins back to the fabulous oceanliners of bygone eras when traveling the ocean was an event of a lifetime. Cunard made a reputation for itself at that time with some of the finest ships on the sea and they carry on that tradition with their current line, the Queen Mary 2, Queen Elizabeth 2 and Caronia. The Queen Mary 2 is touted as “the world’s largest, longest, tallest, grandest ocean liner ever.” At over 1100 feet long, she can carry up to 2620 passengers and over 1200 crewmembers. If Cunard’s ships are known for their luxurious amenities, the Queen Mary is especially fine.

All of these cruise lines, as well as many of the others available to travelers have websites with volumes of information on destinations, fleet, amenities, onboard life, and the many other aspects involved with planning a cruise. Just looking at the beautiful photos of exotic destinations and unbelievably accommodating services available onboard makes one want to start packing immediately. The only unfortunate thing about the expansive number of choices available to cruise travelers today is that there are so many cruise lines and so little time.