The Caribbean is host to numerous beachside bars with eclectic ambiance, good rum and steel drum bands, but only a few bars are world-renowned. If you’re visiting the British Virgin Islands, you’re in luck, as it is home to one of the most popular beach bars in the Caribbean – Foxy’s Tamarind Bar. 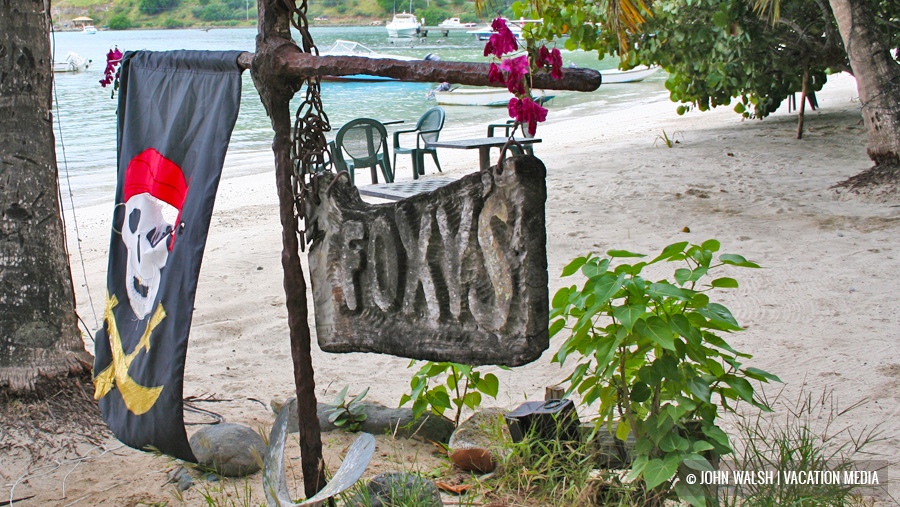 What began as a simple lemonade stand more than three decades ago has become years of revelry along the shores of Jost Van Dyke in the Great Harbour, led by sixth-generation native Philicianno Callwood, a.k.a. Foxy. The island has been nicknamed the “barefoot island” for its casual feel. As a harbor joint, Foxy’s became a popular draw for sailors, but the open-air restaurant and bar’s entertaining scene soon became a must-see for every traveler passing through the Virgin Islands.

Foxy’s allure comes from Foxy himself, a barefoot singer and entertainer who will often perform impromptu calypso tunes and personally greet guests – many times poking good-natured fun at unsuspecting tourists. When Foxy can’t be there – a rare occurrence – he doesn’t want to disappoint, so a life-sized mannequin nicknamed “Epoxy Foxy” stands in his place. Don’t let Foxy’s fun-loving ways fool you, this big softy is also the founder of the Jost Van Dyke Preservation Society and gives back to his community in more ways than one.

The party scene is in full gear Thursday through Saturdays as live bands, including performances by Foxy, fill the beach with reggae, rock-n-roll and other island sounds, beginning in the afternoons and carrying on into the wee hours of the night. The 40-foot Outback outdoor stage has been home to local and International acts, including the Beach Boys! But Foxy’s renowned party scene goes beyond a typical weekend gathering, and people worldwide make trips to the British Virgin Islands for Foxy’s special occasion celebrations, including Old Years and the Wooden Boat Regatta.

Perhaps the most popular of parties is Old Years Celebration, which is what we American’s call New Year’s Eve. Foxy’s party begins on December 30 and doesn’t end until the New Year arrives. Reservations are most definitely required – and they should be made well in advance – as this is THE party on the islands, complete with Caribbean barbeque on the beach or more “upscale” dinner fare at the Upper Crust dining room; a flow of drinks, including Foxy’s distinct microbrewery beers; and an array of Calypso bands. As a sailor’s delight, the Great Harbour fills with yachts and sailboats during the Old Years’ gala, oftentimes making it feel the harbor is home to one giant raft in which people party from boat to boat.

As a sailor himself, Foxy honors his nautical past and guests with an annual regatta. Instead of fancy sailboats, however, Foxy created a race for the more rare wooden boats to compete, as a true sailor should honor these handcrafted and endangered modes of transport. For more than 30 years, the Wooden Boat Regatta has brought wooden boats from around the globe to compete at the West End Yacht Club, and Foxy starts the show with pre-race and après-race parties, complete with more barbeque, music and drink.

Halloween is also a good time to visit with Foxy’s annual Halloween costume party – island style – and the Halloween Cat Fight, another sailing competition for catamarans.

While the party may be the reason to visit Foxy’s, it is a full restaurant and bar, opening at 9:30 a.m. and serving food beginning at 11:30. For casual dining with bare feet in the sand, Foxy’s serves up some of the best Caribbean barbeque in the tropics, including chicken, ribs and even fish – don’t miss the Flying Fish Sandwich just for its name alone. A la carte dinners are prepared Mondays through Thursdays, while the “Grillzebo” is ignited for delicious barbeque on weekend nights (no lunch is available on weekends). When looking to dine “in style,” Foxy’s Upper Crust Dining Room, which seats 100 guests, provides a more refined dinner experience, with fresh lobster and other fish from the Caribbean Sea.

Foxy’s Microbrewery, the only one in the Virgin Islands, creates four different draft beers, as well as Foxy’s own rum, so diners and party revelers alike will always have plenty to drink. Be sure to try the infamous “Painkiller,” a concoction of rum, pineapple juice, nutmeg and coconut milk.

Before you leave, be sure to visit the Fox Hole, which sells clothing and souvenirs. Just as a Black Dog t-shirt from Martha’s Vineyard or a Salty Dog t-shirt from Hilton Head connects you to the many travelers who have passed through these popular bar and eatery doors, prove you’ve been to Foxy’s with a t-shirt as well, then connect with strangers back home that recognize the island hotspot.